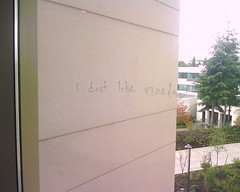 Something that's hard to miss: My LiveJournal isn't really about my life anymore. I don't describe things that happen; it is not a chronicle of daily events.

There are two direct causes of this. One is that I got a Twitter account. The other is that nothing especially interesting has happened to me because I have not done anything of particular note. I go to work, I come home, I cook, I clean, I do whatever I can to keep my household together. (I take after my father too much in that regard- I'm the head of the household, and even when I'm no longer the sole income-earner, I don't think I'll have an easy time letting that go.) I honestly think the second effect is a lot stronger than the first- I stopped updating this regularly way before I got a Twitter account.

This is why the various statements about "life is boring after you graduate" are true: college is a hell of a lot more varied than a day job, and while that day job can be interesting, it rather ties you down at home. Part of this is my lack of motor transportation, but I haven't been anywhere new for quite a while. I still don't know what's "interesting" in the area, for my rather limited definitions of "interesting"- I'd much rather see weird architecture or nerd museums than most social venues. Maybe- okay, definitely- I should take a day with decent weather and just pedal around Marymoor Park. I still haven't done that since I moved here, it's just a place to go through to get to downtown Redmond- which I also haven't explored nearly enough. There is a lot of nifty stuff in downtown Redmond, I just haven't seen it. My Nokia N810 has a GPS unit- I should be less afraid of getting lost and just wander around more. (Especially if I can figure out how to make OSM2Go work. The Open Street Map data for the local area is completely wrong in a lot of places that I can fix, easily.) Emotional burnout from work is part of it- but my burnout is releasing, slowly; getting more sleep (I should be going to bed, not posting this) and a new boss do a whole lot to help matters.

But yes, Twitter has definitely cut into my LiveJournal usage. Previously, something I wanted to mention would happen, I'd file it for later, and then it was highly random- with a percentage around 25% or so- as to whether I'd mention it. This represents some fairly major things I pretty much missed; I just never got around to writing them up.

With Twitter? Random triviata of my day don't get filed for later, they get microblogged immediately. If I want to work them into a bigger post connecting things later, I can and sometimes do. (I almost certainly will during the Windows 7 launch this Thursday.) But otherwise, they just sit around as 140-character data-burps, little snippets of life- and they're out there, instead of languishing in a file of things I feel guilty for not writing about, get harder to write about as they get further off, and yet block me from writing about additional things until I've written this one.

So I guess Twitter is doing what I wanted it to do. I dash off the trivia of my day on whatever device is most convenient at the time, and then my soul is lightened of it. I am no longer bound by my failure to express it, because I just did, so my future expression is not constrained by a duty to this previous thing. (And for things that irritate me, just complaining to people about it helps, even if I get no replies. I complained to someone, dammit, and even though nobody cares or has any clue what the hell I'm complaining about, it helps.) LiveJournal? That gets more complicated stuff, thought debris and what things mean to me.

My relative LiveJournal silence is a reflection of a lack of creativity and a lack of novelty in my life right now, not Twitter taking it away. I think it's the creativity, really, and all else follows from there- I just need to write more, it's not as if the world is hurting for topics. I should comment on news, events, and politics more- just writing it gets me thinking about it more, and that would be good for me.