How to not solve crosswords 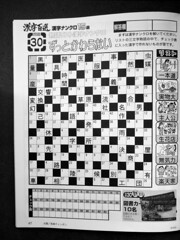 (Just a reminder, if you missed it: I do paid Tarot readings. Let me know if you want one!)

In my usual overcomplicated way, I have come up with an overelaborate system for not solving crossword puzzles.

Don't get me wrong. It's not that I don't like them. Actually, I really enjoy crossword puzzles- now, anyway; I used to find them boring and frustrating, but somehow, I got better at them in the intervening 14 years since I tried them last. It's almost as if I learned something since I was 9. Huh.

I like word puzzles of all stripes, really, which is why I bought $35 of back issues (after shipping) a short while ago. (They should keep me busy for a while. By the time I finish the set, they'll have a new set of back issues available.) I bought it when I was having a peculiarly specific urge to solve crosswords, so I got the crossword-tilted set; it's about half generic variety puzzle books, a quarter dedicated crossword books, and a quarter variety puzzle books with a focus on crosswords. I've been enjoying it; it's just showing that while I'm better at crosswords than I used to be (and orders of magnitude better at the generic word puzzles- I find myself solving a lot more of the variety puzzle books than I used to), I'm still not actually good at them. I'm especially hopeless at puzzles heavy on pop culture and celebrity references, but my poor geography isn't helping things, either.

So I spend a good deal of time not solving crosswords. When focusing on one of the back issues of Dell Magazine's Crosswords Crosswords, I usually spend at least as much time not solving the puzzle as I spend actually solving it; all that's left is a network of clues I couldn't solve.

On the computer, I can cheat. I can do that on paper, too, it just takes more work to only see the part of the answer I want the answer for. I've gotten skilled at that, though, with careful selective attention. But something else the computer does is mark which cells I've cheated on.

In my usual pedantic way, I've developed a system to determine exactly how much I had to cheat to "solve" a given puzzle. When I give up and check the back for one word, then every empty cell is marked with a line diagonally cutting off the upper right corner, making a small white triangle: "cells I couldn't directly fill in without at least one hint". The word I look up directly gets those filled in, with a black mark. Words I'm uncertain enough of to check, but had right, get an X there instead; if I had them wrong, it's the black corner with an extra line parallel to the base.

So after the puzzle is completed, I have a clear visual overview of exactly how thoroughly I didn't solve the crossword, while still getting to actually complete it. I'm not quite pedantic enough to count up the squares and take a percentage, although I admit I've considered it a few times.

I'm not very good at crosswords, but I'm working on it.