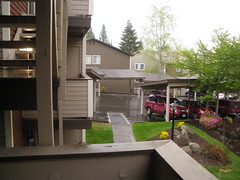 I took half a day off today. No, the other half, I'm sitting here in my office waiting for Outlook to figure out if it ruined its own database or not. Today, the end of July, was the final day on my lease in The Onyx.

With the apartment barren and empty, Rakeela and I spent the morning cleaning the kitchen, the bathroom, and the surfaces. We've been told not to worry about the floors; they're going to be professionally cleaned no matter what we do, so we shouldn't go to the effort ourselves. They do definitely need it.

Around noon, we walked to the Onyx leasing office- they finished the rennovations just last week- and returned the keys. (And then I went back to our new- well, our only, now- apartment and found the gym access card, which I'd forgotten about until I handed in the keys- and they didn't remind me of. If I hadn't remembered and found it, it would cost $150.) They were polite and professional about losing a resident, and I wished them well, as the better they do, the more competitive pressure they put on where I live now...

The old apartment wasn't particularly bad, but it wasn't really enough (especially the kitchen), and I'm glad to be out of it for somewhere bigger, better-ventilated, and more comfortable. I'll always remember it, but I don't think I'll really miss the place.

Yesterday would have been a lot harder for me, and I'm glad Rakeela dealt with it instead of me. That was when we hired a trash company to get rid of a 15-year-old pressboard desk that got damaged during shipping, and a 20-year-old pressboard desk that can't hold a modern computer monitor anymore and was the right height for me when I was 10, which I am not anymore. According to Rakeela, the man who broke down the large L-shaped desk had great fun leaping on it to break the connectors. After being unable to take it apart, they were considering simply keeping the small desk- "the job wouldn't be worth it if [they] couldn't take stuff home"- so they picked it up whole, at which point it violently imploded, much to their amusement. I think they kept the old microwave, though.

So they took that, and the assorted trash that piles up under furniture over two years (most of it from the first year; I got marginally better at housekeeping, but the new place is already cluttered- I have ambitious plans to throw a lot more stuff out), and the things we chose to leave behind. Most of them were kitsch I brought from St. Louis that I should have thrown out years ago- toys, decorations, and first-grade art projects from my elementary school days. It sat in the box it was shipped in, wasting space in the closet for years. It was time to let it go, but that's hard.

I'm just glad Rakeela was there to oversee the trash haul, while I was here at work. It's a lot easier on me to just trust that Rakeela intercepted anything important and our thorough searching previously was, indeed, thorough than to obsessively watch the trash-out myself. It blunts the impact of letting all those things be thrown away, and as much as we're in an anti-waste culture now (for good reason), it can be taken too far, and I had done so. In letting those things go, I hope it will empower me to discard still more.

Letting all of that be thrown out- especially the desks- was a lot harder than it should have been, but I was raised to feel very guilty about wasting anything, and to hold onto everything for as long as possible. That doesn't work. I'm trying to relearn to only hold onto useful things, and keep a narrow view of what's useful, because space often costs more than replacement. There's a lot of useless junk in the boxes still strewn about the room we're going to put t'sChillin in, and only a bit over two weeks to get it sorted and removed.

But that time limit is definitely good, or else we'd probably procrastinate forever...