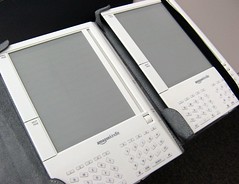 As those of you actually reading my Twitter posts might be aware of, I bought an Amazon Kindle a couple of weeks ago. I've been very happy with this purchase so far; it's compatable with my entire ebook collection to date, mostly because I'm not shy in any way about stripping off the DRM. The Kindle Store does have legitimately lower prices than Fictionwise most of the time, even after the Buywise Club Discount, but Fictionwise's 100% rebate sales are worth going for anyway, and then I use the store credit they provide. I'll be using both stores, generally.

One of the major points of the Kindle, over the iRex iLiad I'd used before (which I still have, it's just now been reconfigured to be loaded out with Rakeela's reading preferences exclusively instead of trying to sort both of ours out at once) is the cellular data connection. I'm not dropping the data plan on my cell phone (can't, work requires me to have it), but the Kindle web browsing experience is better and faster than my phone's. People disappointed with it seem to be expecting desktop browsing, which it's not, but it's awesome for mobile browsing.

The web browsing is, of course, just value-add, since Amazon wanted a convenient distribution channel. They sell books, blogs, newspapers, and magazines over that wireless connection, and even offer a file-transfer service: email any file (in a supported format, which is a lot of them) to your personal @kindle.com address, and they'll convert it and send it wirelessly to you, for $0.10, less than 1/7 the amount of what I waste in the vending machines on an average day at work. Theoretically, anyway.

Oh, the file transfer works fine, and I've found their conversions to be at as good as, if not better than, what I've been able to do with Mobipocket Publisher. The "theoretical" part is the $0.10, which they've never gotten around to billing me, or- apparently- anybody else. According to the MobileRead forums, nobody's ever been charged the dime they keep waving over people's heads. Amazon has never confessed to it, but these file transfers are actually free; they're going out of their way to advertise that they cost money. Everywhere the transfer is mentioned, so's the dime.

This seems counterintuitive. It would sell more Kindles if people knew the service was free, right? Suddenly, it becomes a daily sort of thing, where it's okay to just send random things you'd rather read on the Kindle. That USB cable is for nothing but charging. The Kindle becomes more than just an ebook reader, it's a general document viewer. Whatever you need to read, whenever you want it, free, in under a minute. What is Amazon doing, giving up that advertising- and giving up all those dimes?

You don't hear people talking much outside of the MobileRead forums about the lack of fee. It's like some sort of shameful secret, an evil exploit we don't want to admit we're using, like we're afraid Amazon will take it away. That's silly. This obviously isn't an accident- this has been going on since the beginning of the Kindle 1, and Amazon's had plenty of time to find out. They obviously read the MobileRead forums, after all. Amazon is not doing this by accident. They already have a micropayment plan set up, and a tracking system; the cost of implementation does not exceed the profits. Amazon is not dumb, so we can infer that they are doing this because it is more profitible not to charge then to charge.

First, those file transfers aren't free for Amazon. They have some secret massive contract with Sprint that lets them provide the Whispernet service all over the country without monthly service fees, but with very limited device capabilities. It's safe to say that this deal is for the Kindle service as a whole, and the amount it costs Amazon for each Kindle is actually very small, especially compared to smartphone data plans. Amazon is paying, but they're not paying much; individual files really don't matter much, my e-mailing myself a nine-megabyte copy of the World CIA Factbook aside.

That dime is simply there to establish value. It is a reference point. Amazon wants to discourage frivolous use of the service without discouraging "real" use. People shoudn't be hesitant to transfer a useful file, but not send pointless ones, things they would read in seconds on their PC instead. By establishing a value, people treat the service as though it has that value- and refrain from file transfers that aren't worth that to them, even though they're not getting charged and they know it.

Of course, there's no written and official policy not to charge, so anybody really abusing the system will undoubtably find themselves billed for every transfer.

More valuable to Amazon than the reduction in use, though, is the feeling of indebtedness it creates. The user is now getting something for nothing with these file transfers- from a psychological perspective, it feels a bit naughty, just a bit like stealing that dime every time Amazon doesn't charge. It's not; Amazon has the means and right to charge, or to not transfer the file, but they are refraining from doing so. But users start to feel like they owe Amazon something. If the service was simply free, it would be disregarded, but having an established (but not charged) price feels a little larcenous.

So what's there to do but to pay Amazon back by using their eBook store, paying for a magazine or newspaper or blog subscription, paying back the favor? Maybe preferring them over other book distribution channels, maybe buying just a few things that you might not have bought otherwise, because you "owe" them. This nagging feeling that you "should" be buying a book again, to pay them off for the data transfer.

These books that guilt sells cost far, far more than that scattering of dimes.