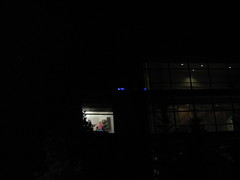 One of Slashdot's headlines today is that the Google Chrome OS is intended to somehow cause Microsoft to run out of steam. The goal is to take the business areas that are actually profitable for Microsoft- operating systems and office applications- and commoditize them, dropping the sale price to zero or near zero so Microsoft's business model can't function. Obviously, I have a strong bias here, but I don't think it's going to fundamentally work nearly as well as the Slashdot crowd seems to hope. I could just make this a Slashdot comment, but I suspect I'll get more interesting replies here.

Given how closely this intersects with my profession, now more than ever I've got to put up this reminder: these opinions are purely my own, informed only from my (few) years of experience in the computer industry and (several) years of education on the topic. They do not represent any position by my employer. This blog is operated by a Microsoft employee, but is not in any way a reflection of the company or the company's position; it's one person's opinions, exactly the same as I used this blog before I got hired. Microsoft doesn't exactly take positions on furries or people who think they're dragons, either, in case anybody got confused.

Anyway, I think this will be no more disruptive to Microsoft than OS X or the various Linux distributions on netbooks. This isn't to say that Microsoft should ignore the competition; complacency is the fastest way to lose. I think Google still doesn't understand the market. Microsoft doesn't, either, but they've figured out a few things, and Google has a much higher bar to clear than they think they do.

When netbooks were emerging, most of them shipped with Linux. Most low-storage-capacity netbooks still ship with Linux, because Windows is large and bloated, and you don't need app compatability on a computer too small to install large applications on. It's simply not usable that way, so the OS doesn't need to be usable that way. But Windows netbooks have much lower return rates than Linux netbooks, so it's what retailers prefer to stock on machines reasonably capable of running the OS. Microsoft's attempt to rebrand "netbooks" as "low-cost small notebook PCs" is ludicrous, but it shows a slightly stronger understanding, in my opinion, of how to treat the computers. Netbooks should be treated as less-powerful computers with small displays. Of course, my $300 Acer Aspire One is stronger in every single spec except screen size than the $1200 Gateway laptop I brought to my first year of college- and they came with the same operating system out of the box, so they're only low-spec by today's expectations, not low-spec by any objective "can I get work done with this?" measure.

The Slashdot- and, apparently, the Google- perception of a netbook is an inexpensive portable terminal to connect to the Internet with, and use for primarily Web-driven tasks. This leads to minimalist, fast, web-browser-centric designs that are not intended to be functional without an Internet connection and are not designed to have significant client-side applications that are not fundamentally communications-based installed or running. And I want my netbook to be able to do that: I want something I can turn on in five seconds and start browsing the Internet with. I can't wait for Moblin to be mature enough I can set it up as one of my alternative-boot operating systems. But guess what? I'm a geek. I understand what the Internet is. I understand what is online and what is not, and I understand the limitations of a netbook- and what will run client-side and what needs an Internet connection to work. I, like the majority of designers and developers for Google, understand the technology at hand, the design trade-offs, and why I would or wouldn't want to boot Windows for a particular use.

But I definitely wouldn't want a netbook that isn't Windows-capable. I certainly don't use it like a netbook most of the time- I just use it like a highly portable computer that doesn't have an optical drive (except, of course, when I plug one in). It also has an eight-hour battery life, courtesy of the nine-cell battery I bought last week. (I use the stock 3-cell when I need better portability, though.) I've got Office on it, because I want to be able to do full document editing without relying on an Internet connection- and that's the same reason I installed the client for Evernote, rather than calling the web version "good enough". It's probably worth noting that I also installed Steam, mostly so I could shove Chessmaster Grandmaster Edition and Civilization IV on there. Why shouldn't they be netbook fare? The computer's plenty powerful to run each of them. (When I turn the graphic settings down, anyway.)

I do all this understanding the limitations of netbooks. I don't expect it to be as zippy as my other computers. (It usually is anyway. I still don't understand why it consistently performs better than my corporate-issued laptop, a Lenovo X61 with twice the specs as a minimum on everything but hard drive space.) I don't multitask as aggressively. (There's not enough screen space to, anyway!) I know the difference between a netbook and a fully-powered computer, and I work around it.

This puts me in the top n% of computer users for values of n that are probably higher than I give people credit for, but probably under 30. I like computers. The vast majority of Google employees like computers. The sweeping majority of Slashdot commenters like computers. The majority of computer users tolerate computers, right until they start interfering with their work with all these weird dialog boxes, which they click the buttons on to make them go away, based on what they've learned makes dialog boxes go away. The Internet runs on their computer, and they're not sure why they have to subscribe to it but if they stop paying it stops working, and there are other places they can use the Internet if they have this little radio turned on. Some of them make you type a weird password in a weird place, and sometimes it doesn't work at all. Their computer is a mysterious thing that works until it stops working, and then it's Microsoft's fault. (This includes Mac owners.)

The average computer user, especially someone buying a computer because "they need one for college", will buy the cheapest computer they think they can make sense out of unless they are buying one specifically to run a particular program; in that case, they'll buy whichever one the salesman tells them will run that program. (Although to be fair, the MMO crowd is likely to at least understand graphics cards.) The problem with netbooks that run non-Windows operating systems is that they clearly claim everything they're capable of, but unless they were using Google Apps anyway, it's not like what they were used to- and it doesn't work without this weird transitory Internet thing! This isn't a computer like what I'm used to, it makes no sense! Back to the store it goes! What do they mean "it's best used with Internet-driven applications?" I use the Internet, so that must be what I need. What's this? Where'd the thing I write letters in go? What happened to my e-mail? Where's the blue "e"?

If someone wants an Internet-based netbook to work for the average user, they're going to have to do a hell of a lot of user-ed to show them how to do it, and they're going to have to figure out how to make the users actually pay attention and learn once they've discovered they need to do different things to do the tasks they're used to, but stay out of the way otherwise- they don't want to learn, they just want to use the computer. It is not an easy task to figure out how to teach someone something multi-step when they just want to do something that they've already found out (rather unpleasantly) that they can't do the way they're used to.

Whoever solves that problem first will win. Chrome OS is trying to solve the fast-booting small Internet-driven OS problem. It's a great problem for nerds to have solved- I'll probably put Chrome OS as an alternate boot if Google makes it available- but it misses the problem that made the other operating systems that aren't stock-standard Windows (with a few modified layout decisions) have trouble going mainstream. There are plenty of solutions that can be transparent to the user, but none of them will prepare them for the shock they're going to get when they aren't connected to the Internet and try to use them. Which is what Google Gears is going to try to fight, I suspect. But that's absolutely nothing a clever OEM can't do with pre-installation of the Chrome browser and pre-populating the desktop with Gears-enabled web-app shortcuts- and they can legitimately advertise the power of the Chrome OS combined with the power of Windows. Does Windows add less value to a netbook than the cost of the Windows Tax? For some people it won't, and that's the market Chrome OS will find. If Google does it right, it'll find a large enough market to keep it a lot more alive than the scattered, non-standardized netbook Linux distributions to date. But I don't think they've yet figured out how to challenge the much larger market share of people who don't really know how to use computers.

Incidentally, this is the exact market that Bing is attempting to take from Google. It's the people who ask questions in the search box instead of understanding how to use search terms. Bing's results for a clearly-written Google-style search query are still worse than Google's. But Bing's results for a badly-written conversational question blow Google's out of the water. Microsoft is wagering that there are more people who don't know how to write search queries (and don't want to learn) than there are people who know how to write search queries.

Google Chrome OS is a very interesting entry in the field, but it's not targeting Microsoft's fundamental market, and won't for a few versions. In the meantime, Microsoft has the chance to respond in kind. All this will do, if you want to disparage it as such, is cause a real fight in the domain of netbook interfaces and give Microsoft new competition using a significantly different strategy than Apple's shiny premium market target- which can only be good for the field as a whole, because nobody innovates quite so fast as when they're trying to beat the hell out of each other.