The poll on my previous non-Twitter entry came out as a 3-to-3 draw. Thanks for the advice, everybody!

Actually, it helped, because I got a better feel for the reasons I'd want or not want Flickr. And for what I want out of photo hosting, Flickr does it better than LiveJournal.

I don't just want a photo dump to hold pictures I can occasionally glue to LiveJournal entries or point to later. ScrapBook is great for that, and it will continue to be the repository of non-Flickr things; given my proclivity to make diagrams for just about everything (at least in my notes), I'll still be using the LiveJournal provided image hosting. I'll just be using Flickr for photos.

I want to become a better photographer. I like photography; it's a fascinating form of visual art. I am not a professional photographer, obviously, nor am I likely to be, nor am I likely to develop my skill to that level. But I believe I could become skilled at it, instead of average as I currently consider myself to be, and I wish to do so. This includes not just the basics of snapshots, but learning how I really should be setting all the settings in my camera for each shot ("Auto Shot" is fast and reasonable enough, and it's much smarter on this than on my previous cameras, but I still need to know how to tweak the settings ideally), and then to become skilled at touchup thereafter, courtesy of Serif PhotoPlus- both to improve the photo as a photo, and to do things to it as art. (Some things look interesting hypersaturated.) I already have marginally passable Photoshop skills to get votes in Fark contests; I now want to play with it for the task for which it was built.

I want feedback on my photos. I want to show them off somewhere prominent, rather than as purely an adjunct to something else- namely, this blog- and have the ability to get feedback from like-minded people on improving that skill. Flickr is ideal for this.

Finally, I really like the Photostream concept- the cross-gallery "latest pictures" list; it makes galleries much more browseable, and it matches how I like to navigate.

So I'll be getting Flickr Pro, eventually. It can wait until morning, at the very least. 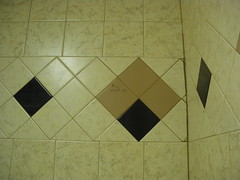 Notes from a Safeway bathroom
Originally uploaded by Kistaro Windrider
Yes, I'll use my camera just about anywhere there's something interesting to photograph.
Collapse